I'd heard quite a few 'meh' reviews about "Dragon Age II" before I had a chance to play.  Not that it was bad, just that it wasn't an exciting follow-up to the stand-out "Dragon Age: Origins"; that it did not equal, let alone surpass, its predecessor.

This is true only in some respects.

Character-wise, it was brilliant.  Varric is the absolute stand-out, the best company any warrior could have - as well as an excellent person to carry the tale into the future.  Aveline enjoyably upright in an occasionally teeth-grinding way.  Fenris, slightly psychotic, but tremendously honourable (and glowy!)  [Though with a disconcerting number of things in common with Faille from "Stained Glass Monsters".]  Anders, returning with a warped sense of Justice.  And Flemeth, rather marvellous this time round.

Environment-wise, fairly poor.  There's not much travel, and a big re-use of maps.  The combat didn't require a great deal of thinking (but sometimes I like it that way).

Plot-wise, this is an unheroic story with a time-skipping structure which gave an episodic and somewhat sour flavour to what is a historic chronicle of how politics and madness in one city led to the great mage-templar war.  When your character isn't straight-out hunting money for the sake of money, or losing important people with no chance of rescue, they're wobbling a tight-rope path toward an inevitable confrontation.  In the end I felt like I'd surely slaughtered everyone on BOTH sides, and that there could hardly be anyone left to argue any more.

I'm glad I played, and in some ways this surpassed "Origins" for me, but it's hard to feel uplifted.  So, recommended, but I hope that the next game in the series favours heroism over politics.
- March 29, 2011 No comments:

Email ThisBlogThis!Share to TwitterShare to FacebookShare to Pinterest
Labels: dwj

Just received the final art for Caszandra (Part 3 of Touchstone) and couldn't resist immediately playing with title placement (still have to do font selection and fool with colours, but the overall placement works for me). 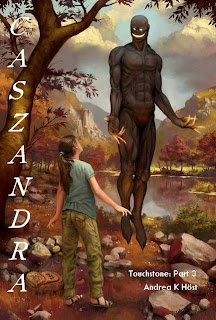 I'm just awed by the beauty and realism of Simon Dominic's work, turning the planet in Touchstone into a tangible place, and making Cass into someone who I feel you could see walking down the street.  And blocking the way, sucking all the attention, the most unnatural, powerful wrongness of the Cruzatch.

I love particularly the echo set up by the position of their fingers.

[This image also keeps making me think of an old song: "Hey there Little Red Riding Hood, don't you know you're looking good..."  The Cruzatch are such gloating creatures...]
- March 24, 2011 3 comments:

What a nice compliment!

"Medair" made the short list for the 2010 Aurealis Awards.  I'll just be over here being astonished and speechless...and celebrating by playing "Dragon Age II".
- March 22, 2011 4 comments:

Stray on the loose

Email ThisBlogThis!Share to TwitterShare to FacebookShare to Pinterest
Labels: stray


Overall an engaging film (certainly much better than the previous alien invasion movie I watched, "Skyline").  But not a rewatch film by any means.

The action and pace is what makes this story: you never spend too long in any one place.  As many reviews have said, this is a war movie, with aliens.  By removing a few scenes, and cutting in different opponents, it would be very easy to make it an invasion of the US by almost anyone or anything.  The point of the movie isn't aliens.

There's really only one character, a marine Staff Sergeant on the cusp of retirement, haunted by the loss of some of his men during his last combat.  In the crisis of a sudden invasion, all hands are 'on deck' and the Staff Sergeant must keep alive a squad who doesn't trust him at all, proving to them - or himself - that he keeps to the marine motto of leaving no man behind.

That primary plotline didn't work for me.  The distrust of the marines (and the coincidence of the presence of one soldier in particular) seems completely out of place in a story which is so monumental, so world-changing.  The focus on "can we trust our (extremely competent and heroic) staff sergeant" sat badly with a 'rout of mankind' story.

Unfortunately the rout of mankind story was pushed to the background by the marine trust issues, and while it followed a not unsatisfying course, it did leave me wondering what real marines would think of these movie marines.  The ones who walk into a 'hot zone' talking loudly.  Who don't seem to have thought about snipers on roofs until after the shots rain down.  Would the military send a squad deep into compromised territory to recover a small number of civilians when an entire mega-city is being evacuated and bombs are about to rain down?  I found it difficult to believe in these marines (who contrasted badly with another group of SF marines, also led by a this-is-my-first-mission lieutenant).  The real focus of the SF story is/should have been the gathering of intel, of quickly and effectively finding enemy weak points.  That has been one of the main thrusts of most alien invasion movies because it is a very true one - our greatest weakness in such a situation is our ignorance.  And "Battle: Los Angeles" does that as well, but it's not what the story is about.
- March 18, 2011 No comments:

Paint me a picture

The cover of "Caszandra", the conclusion of the "Touchstone" trilogy, has reached sketch stage, and I'm really looking forward to the final version.  With the exception of Stained Glass Monsters, I've been fairly detailed in what I want on my covers, but the transition from word to image has each time been a thoroughly enjoyable blooming of concept to something far greater than what I was able to describe.

I have a strong liking for painted covers, and so commissioned work specifically created for the stories, rather than photographic or non-representational images, and I'm very glad I did.  It's been interesting to note how the cover art for Champion especially has been interpreted as aimed at middle-school or young adult.  Since the image itself is of a clearly adult woman in a not tremendously pleasant situation, it suggests that it's the particular style of art (painted, realistic but not photo-realistic) which has become associated in people's minds with middle-school books.

Since I love and adore the Champion cover, I wouldn't change it for the world, but it is something to always keep in mind, particularly when formulating the blurb.  The Touchstone covers  are a different artist, but also a painted style.  However, since they feature a 17-18 year-old on the cover, I suspect that they will be read clearly as YA.

"Stray" is very close to ready to go.  I'm most curious to see if the unusual rhythm and pacing created by the diary format will work for anyone.  Each of the three volumes represents a particular stage in Cass' year, and so the split into three parts was, I think, the correct decision structurally, but the absence of chapters and the filter established by what Cass chooses to record, and when she has an opportunity to do so, significantly changes how the story can be told, and also how it will be read.  The usual rising urgency I establish in my novels is, I think, not nearly so present, but I think Cass comes across quite intensely as a person.

What I need to do now is stop myself continually editing and re-editing until I've tweaked all her voice out.
- March 16, 2011 No comments:

A matter of scale

It scarcely looks real: the distance turns the plantations into the landscape of a model train set.  The water is brown, black, channeling down the white rows of greenhouses.  A house follows along, joining a procession of boats, trees, splintered wood.  A gas main sparks and orange flowers bloom and burn in the mud.

You know there must be people down there.  There was little warning, and not everyone could have evacuated.  But the scale hides them, shields them, makes it possible to just marvel at destruction.

But then the devouring tide reaches a road, and a car turns around.

I've signed up two of my books for the "Read an Ebook Week" event over at Smashwords.  Use the RAE50 code to receive a 50% discount on "Champion of the Rose" or "Stained Glass Monsters" during RaEW.
- March 08, 2011 No comments:

Email ThisBlogThis!Share to TwitterShare to FacebookShare to Pinterest
Labels: promotion

A slight redesign of the "Stray" cover to make the title more readable in thumbnail.  On the "thumbnail readability v fancy fonts" question, I tend to go for designing the text for the print edition rather than the tiny thumbnail, but for "Stray" I think that the colour and font choice is an improvement in both the small and large versions.
I've ordered the third cover for what is now the Touchstone trilogy, and have amused myself adding some symbology.  In the first cover Cass is walking forward, but looking backward.  She spends all of the first volume wanting to go home while being forced onward, and this first image shows that neatly.

The second cover is "post-acceptance".  Cass knows that she is not necessarily going to find any happiness staying where she is, but she is no longer straining to go home, and so her gaze is neither forward or backward, but at herself.
The third cover, Cass will be facing away, inward and onward.  Just with a rather...formidible barrier between her and that future.  Ah, won't see that cover for a couple of months, but I'm already thinking through layout and design.

Decided "Touchstone" should be in three volumes (it's over 350,000 words long, which was making for some decidedly large parts).