Life is Strange (all the spoilers)


Life is Strange is a recently-concluded Square Enix game set in a US high school where our girl photographer protagonist Max discovers her powers of time-reversal and embarks on a journey of choose-your-own adventure and then erase that choice and choose again if you don't like the outcome.  I played the first episode of this some time ago and set the game aside because I'm not overly keen on playing through the teen experience of bullying and girls-as-victims of violence themes that the game seemed to focus on. 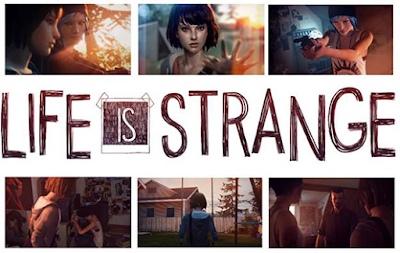 But plot curiosity is one of my traits – and since I'd already purchased the full series, I picked the game up again after episode 3's release.
The game is a type becoming more common: small to no combat (LiS has none), similar to visual novel games where you follow a primary plot while impacting secondary outcomes (how other characters feel about you, usually), with all those choices ultimately deciding which "endings" are available to you (often ranged from 'best ending', 'good ending' and 'bad ending').  These games are also increasingly broken up into a number of chapters, where at the end of each chapter you get a summary of the major choices, and a breakdown of what percentage of players made what choice. 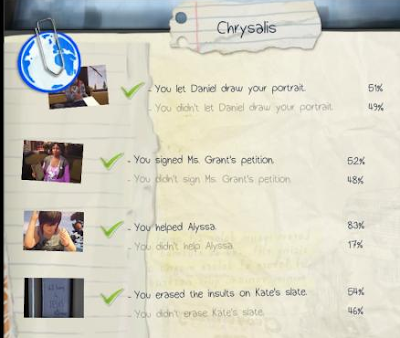 LiS has many positives.  It's visually lovely, and the photography works nicely to make the player look at the world in even more detail.  It's well-scripted (the teens mostly talk like teens), well-acted, and has few dull or dragging sections.  If you're looking for a game that grips you by the feels and hauls, then you'll find this is a game that pulls you all the way under.
My initial qualm about the game – that of not really enjoying situations of female victimhood – is fulfilled in the final episode with a truly unpleasant visit to the "Dark Room".  But it's the final decision of the game that has me continuing to think about the game.  [Don't read on unless you're happy to be completely spoiled on this game.  Also note that this is a game that definitely warrants several trigger warnings in relation to bullying, abuse and suicide.]

LiS starts out with Max returning to her home town of Arcadia Bay to attend Blackwell Academy – particularly the class of a prestigious photographer, the hipster-cool Mr Jefferson.  Like many schools it has problems with bullying, of privileged and non-privileged students – and it's plastered with posters of a missing girl, Rachel Amber.

During class one day Max has a strange vision of climbing to a lighthouse during a tornado.  After class, a trip to the bathroom (and the inevitable butterfly-effect allusion) leads her to witness the school rich kid, Nathan, meet with a blackmailing, blue-haired girl – who he promptly accidentally shoots and kills.
Wanting to stop this event leads Max to discover she can rewind time, and she ends up back in her classroom, right after she'd had her vision of a tornado.  Naturally, she sets out to "fix things" by saving the mysterious blue-haired girl from being shot – doing so by setting off the fire alarm.
Max now has a dilemma – she knows that Nathan has a gun and is seemingly spiralling out of control – but she also has brand new rewind powers.  Unfortunately, Nathan's now suspicious of her, and confronts her in the car park, only to be foiled by a quick getaway in the truck of the blue-haired girl, who turns out to be Max's nearly-unrecognisable childhood friend, Chloe Price.
Where Max is shy and a little nerdy, Chloe is brash, rule-breaking and defiant – considerably changed from the girl Max knew.  Much of this change is put down to the death of Chloe's father shortly before Max's parents moved from Arcadia Bay: Chloe has been acting out from a sense of abandonment, her anger exacerbated by her mother's remarriage to an all-rules-and-lectures security officer, and then the disappearance of the friend who was helping her get through it all, Rachel Amber.
The relationship between Max and Chloe is the core of LiS.  Max's guilt and Chloe's anger play off each other as they renegotiate their friendship, and try to investigate Rachel's disappearance while dealing with the various crises that arise from a dysfunctional school – the bullying frenemy Victoria, the fragile Kate, the wants-to-be-more-than-friends Warren.  Max, with the advantages of time reversal, can help or hinder her fellow students, can accept or fail to notice Warren's romantic overtures, can uncover the spying tendency of Chloe's "step-douche", David, and anger – or kiss - Chloe.  There's a lot of joy in this section, this connection between two friends, but a couple of flies in the soup as well: Chloe is in debt, she's angry, she's messed up, and she's occasionally willing to throw Max under the bus for her own benefit.  But then, Chloe's had a dark few years, and Max's return is helping. 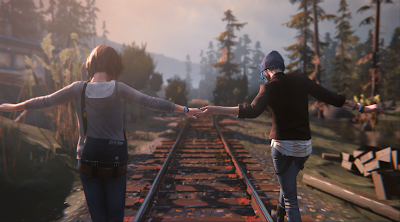 It's not until Kate attempts to commit suicide that Max really hits the limits of her power.  She can reverse time enough to try to talk Kate down, but she can't reverse it so far as to undo all the little choices and decisions that will make the difference between succeeding and failing.
Many players are unable to save Kate – an event so upsetting that quite a few players replayed previous chapters in order to be able to succeed – something that Max is unable to do – until she can.  Or, at least, Max discovers her time-travel abilities have expanded to travelling to any point of time in the past that's been captured in a photograph.
Naturally Max immediately travels back to "fix" the major event that seemed to cause so many problems: the death of Chloe's father.  And it works!  She visits the past, prevents a car accident, and returns to a future where Chloe's dad is still alive – and Chloe had a car accident instead, is paralysed, and dying, as her parents drown in medical-bill debt.  This is where the player might feel that the game universe is being a little unfair, as Max has to choose between undoing her "fix", and killing her best friend.  She chooses the friend, of course (not something players can alter), and the timeline reverts to the angry Chloe fixated on finding her missing friend.
Here the investigation steps up, but with a suggestion of a major cost.  Weird stuff is happening around town – snow in summer, whale beachings, doubled-moons – not to mention those persistent visions of a mega-tornado, and a clear physical toll on Max.  The story presses on, uncovering the truth about Rachel Amber – and the reasons for Kate's distress, and who is the bad person behind all this, which culminates in Chloe's sudden, shocking murder, and a not-at-all pleasant scene at the beginning of the final part of the game, where all players everywhere really want Mr Jefferson to just shut the fuck up, and Max is frantic to escape and go back and stop Chloe from being killed.
Which she does.  But here we hit the real consequence.  Messing with time, as heavily foreshadowed, carries a storm of a price.  Max's mental situation starts to fragment, as we spin through possible alternate realities – or perhaps simply nightmares – until finally she – and the players – are faced with one final choice: go back and undo the first change, the one that set this all off, or watch the entire town be wiped out by a no-warnings tornado.  Let Chloe die, or destroy the town.
In other words, this game doesn't have a "good" ending.  This is a game where you kill the person you have spent the entire game trying, in one way or another, to save, or you become a mass murderer.  Where you kill fragile Kate, sitting in her hospital room.  Where you kill Chloe's mother.  Where you kill Warren, the science-boy who was so eager to play White Knight for you.  Where you kill Victoria, the frenemy you ended up kinda on-side with.
Where you kill babies.
And here's where those end-of-chapter choice statistics become fascinating.  Because (last time I looked) in this lose-lose situation, 50% of players save the town.  50% save the girl.
I'm hard-wired in the former camp: the Mr Spock camp, so to speak.  You don't kill hundreds of innocent people to save one, no matter who they are, no matter how much you care.  You don't kill babies.
So I, the player, watched Chloe's funeral, and cried quite a bit.  Then I turned to ever-useful YouTube to watch the alternate ending, where two friends – horrified, exhausted, stunned - drive out of town through the wreckage, leaving behind nothing but rubble and corpses.  Together at any price.
[I have to wonder if Chloe's surname isn't a coincidence.]
Anyway – an unusual, powerful and complex game.  I don't think it's an entirely fair dilemma – there was no option to let the storm hit but do your best to evacuate the town, for instance.  I also think that there's a mild logic issue with why Max's power woke at all – she didn't even know it was Chloe being shot, at first, and wasn't nearly so powerfully bound up in saving her until after they reconnected.  So why did the time-bending power waken?  But I still like how this ended, I like this choice between loss and being (basically) a villain.  And it says something for the sheer charisma of Chloe, the power of the friendship (or potential romantic relationship, if you followed that course), that so many players will choose the one over the many.
[Note: the game skirts into ableism in the alternate timeline (this skates by because Chloe is not only disabled, but a few months short of death, so the message that being paralysed is worse than anything is leavened).  Nor is the story's handling of David (does very iffy things, but ultimately forgiven because well-meaning troubled vet) entirely unproblematic.  Because Chloe is also fairly clearly signalled as a lesbian, the game also falls into the "tragic queer" territory.]
- October 22, 2015