The point where I lost interest in Until Dawn was well over halfway through the game - after the First Reveal, and the Explanation Point.  At this point, the four characters I had not yet failed to keep alive (because you can, theoretically, keep all your characters alive in this survival horror game) have been told Just How Bad It Is and (mild spoiler) leave relative safety for, so far as I can tell, very little reason. 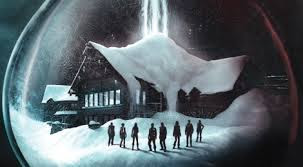 No, actually, it was when three of them (travelling in a group) not only bring no weapons, but they split up without hesitation.  And I just stopped caring.

The mechanics of the game are, in themselves, quite playable.  None of the teens in this teen slasher flick game are necessarily going to die.  They do, however, have multiple opportunities to die, depending on your branching choices, and your ability to hit triangle-circle-square in quick time action sequences.  NOT acting at certain times is also critical for survival - something that the game exploits, since you become very punchy about hitting buttons as soon as they're signalled on screen when that's usually the one thing keeping you alive.

The story is pretty par for the course for a teen slasher story - not very interesting in itself - and the characters are quite clearly deliberate stereotypes: jock, slut, sweet guy, geek guy, geek girl, bitch, dork-bro and ingenue.  It was fairly hard to like any of them (caught as you are between bland and deliberately off-putting).  Though I ended up very sympathetic toward Emily (the bitch) just because she went through _so much_.  After all the extended awfulness she survived (and apparently she has at least twice as many opportunities to die as the ingenue) I'm kinda glad I stopped before accidentally killing her.

If you can put up with the idiocy that killed the game for me during the end game build-up, then gamers might enjoy Until Dawn for the sheer challenge of not getting anyone killed (I don't even know what I did to get the first one killed), and seeing how the dynamics of certain scenes play out if more characters have survived to be present.

I was also quite interested in how close to crossing the uncanny valley we're getting, at least in the pause-scene close-ups of character faces, where many of the tiny movements of a living face have been mapped, making them look eerily alive.  Not so strong in the full-body playable scenes, but I was impressed otherwise.
- October 05, 2015