See the giveaway details at Goodreads.

Enter to win
I seriously mean it about the doorstop. This thing is ridiculous. [At least I've fixed the cover, which showed a distinct tendency to bend the title around the edges in the first copies I received.] Still working on GE, but it will def. be out before the end of the year.
- December 28, 2011 2 comments:

I was having an interesting discussion the other day as to whether it was a bad thing that Tintin (the movie) had no female main characters.  Having read and re-read Tintin the comics a great deal when I was young (though not for years), I knew that there was very little room in the existing story for a main female role.  The entire series of books only has one memorable female character and, like most characters in Tintin books, she's a broadly drawn exaggeration of a creature.  For a female to go adventuring with Tintin, she would need to be wholly created and given some role in a plotline which never considered her.  I particularly would have hated a female character added purely to be the love interest.

Having seen the movie, I still don't think that it would have been a good idea to add a main female character (unless they gender-switched everyone, which would have been AWESOME), but the absence of females does underline what a strange, sexless creature Tintin is, running around with his pet, interested only in chasing whatever story has caught his curiosity.  The comparisons to Indiana Jones particularly underlines a certain lack of emotional resonance.  The growing friendship with Haddock works, and lets us see Haddock's development, but also gives us a particularly unconvincing scene where Tintin reacts to a set-back which reminded me so clearly that Tintin has little motive in this story.  He's only in this for the curiosity (and nice-chap-ness), and despite all the cool action, that starts to tell.

On the whole it was a fun movie, but it will never get anywhere near re-watch material for me.
- December 26, 2011 2 comments:

The people behind my sister in line at McDonalds told her she had a stowaway under her car...

Apparently this is a diamond python.  And, fortunately, the spare type it's curled around can be lowered without actually getting up close to test your snake identification skills.
- December 25, 2011 4 comments:

Email ThisBlogThis!Share to TwitterShare to FacebookShare to Pinterest
Labels: Australia

You've seen the cover of Caszandra - powerfully realistic, in a gorgeous burnt-Autumn world. 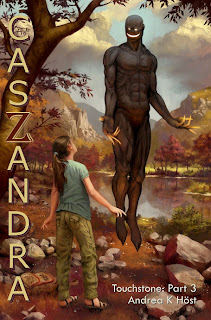 Now is revealed the incredible concept art I provided to the artist, Simon Dominic, to explain just what it was I wanted in the picture: 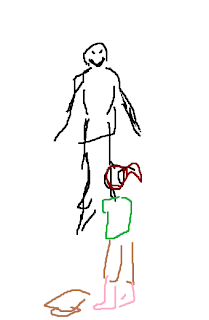 I am actually capable of a basic level of drawing, so long as it's on paper with a pencil, but I cannot for the life of me draw on the screen.  It is an entirely different skill set.

I draw a great deal less than I once did, and no longer draw character sketches of my characters.  Here's a sketch of my very first novel protagonist, from the never-again-to-see-the-light-of-day Talismans of Godshelm. 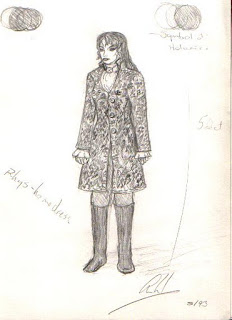 Hm, and one of the interesting people she knows...

A question of exclusivity

I doubt that anyone except the most popular self-publishers will earn any significant money through the Lending Library.  It is, however, like all libraries, a valuable promotional opportunity.  I discovered the vast majority of my favourite authors through libraries (which is why libraries are wonderful and good).  Additionally, many publishing houses have chosen not to opt in to the Lending Library (those publishing houses are not required to be exclusive - they just don't want their books there at the moment).  This means self-published books have a greater chance of standing out in the Lending Library than they do through the standard Kindle store.

The bigger advantage is probably the ability to briefly set your books to free.  As I've discussed previously, riding the free train is without doubt the most powerful promotional tool available to a self-publisher.  I gained the vast majority of my readers because I set Stray to free during October: I received a great deal of feedback which made clear that many of my new readers would likely not have checked out the book otherwise - readers who don't usually try fantasy or science fiction, but found that this particular series worked for them.  Since setting a book for free on Amazon currently involves jumping through a number of hoops, control of this function is a very nice carrot.

During the past year I've sold maybe 150 ebooks through Smashwords, and 150 through the various other channels Smashwords distributes to.  I've sold over 3000 via Amazon.  That's not only because Amazon got into the ebook market early and drove it hard - it's because Amazon simply treats self-publishers better.

Amazon's algorithms will suggest a book to a potential reader because it matches buyer's trends (people who liked this, liked that) irregardless of whether the book is self-published.  Amazon has multiple methods for readers to discover books they'll probably like, from bestseller lists to those also-boughts.  And, unlike certain other ebook distributers, they don't separate self-publishers out of the best-seller lists, or artificially lower their rankings.  While Amazon doesn't give self-publishers all the advantages of publishing houses, they've apparently recognised that self-published authors can provide their customers with something they want.

Which is great!  But Amazon offering incentives to self-publishers to ONLY publish through them is a far from simple step.

In the discussions which have been raging about this issue, it was quickly pointed out that an ebook could be bought from Amazon and then converted to other formats, or even emailed directly from author to reader following a purchase.  And that you didn't need to put ALL your books in.  And that three months isn't forever.

After you opt into the Lending Library, you have a couple of days to change your mind and then you can't opt out for three months.  Once the three months is over, you'll either be renewed, or can opt out.  So exclusivity is not necessarily permanent.  And so many self-publishers have been taking up the exclusivity option - whether for one book or all their books.

Most of my book reading comes either from carefully-considered SFF purchases, or 'popcorn reading' cozy mysteries.  I buy almost all my books as ebooks these days - particularly those popcorn reads.  If the book isn't available to me as an ebook (whether through issues of regionality, or because there are only physical books), I do one of three things:
"Forget about it" is by far my most common response.  Added to this is this new extra complexity of the book only being available if I purchase it through a particular vendor.  While I happen to own a Kindle and buy most of my ebooks through Amazon, I took the time when making this decision to put myself in the shoes of someone who didn't, to decide what my response might be.  This covered the range of:
I don't particularly think Amazon is evil for doing this - Amazon is simply being smart.  It sells a lot of self-published books and some of those self-published authors have big followings - and this massively bolsters the number of books in their Lending Library.

There are some who warn that this move by Amazon is dangerous for self-publishers, putting all their eggs into one basket and stifling the competition.  There are others who think this will be good for self-publishers because the various other vendors will have to step up and improve their approach to self-publishers if they want to retain their books.

Me, I just don't want to make it harder for that ten percent of my readers who don't buy my books through Amazon.  If a particular vendor offered me ridiculous amounts of money to be exclusive, I'd probably agonise over the decision more, but on the whole I just don't like exclusivity.
- December 10, 2011 6 comments:

This is looking like not being finished till/after Christmas (can't resist adding a bit more to the end).