The Artistic Superiority of Tits Out

Recently Julie Dillon, the first female artist to be nominated for a Best Professional Artist Hugo in close to 30 years, posted on Tumblr a gigantic compilation of pictures by women artists, stating:


This year, I was incredibly honored to be nominated for a Hugo award in the Best Professional Artist category, but I was a little shocked to find out there hadn’t been another woman nominated in that category since Rowena Morrill in 1986. That’s more than a little ridiculous, considering there are so many women artists out there, they are all amazing, and they all need more visibility and recognition.


And the question of course is, how is the disparity in nominations possible?  There are clearly a ton of female artists out there.  Quite a lot of them are working in the SFF field, producing covers that would come to the attention of the SFF community.  Why then are so many male artists being acknowledged, and female artists somehow failing to exist when award season rolls around?

A couple of years ago I joined the Tumblr crowd, mostly as a lurker, and one of the accounts I followed was an art reblogger.  Every day without fail gorgeous art would appear in my Tumblr feed - a selection of representative works duly accredited, with a link to the artist's site.  And it was awesome!  Lovely art, very impressive.  I've discovered tons of awesome artists through Tumblr. (Euclase, I am in awe).

But as a side-effect of this particular Tumblr feed my dashboard was suddenly full of half-naked ladies.  Tiny, cutesy women defying the laws of gravity.  Curvy women with their asses in the air.  "Strong" women in that weird pose where you can somehow see their front and their back at the same time.

Now, there are plenty of women out there who like a fine pair of breasts.  And professional artists are generally working to some sort of order - a request from an art director, a specified scene from a book, a strong imperative from marketing to match other covers that work.  Artists don't all get to decide what they depict, and how they depict it.  So a percentage of "tits out" poses are to order.  But I started looking at the names of the artists behind all those sexy sexy ladies and noticed a distinct correlation between (my guess at) author gender and amount of nakedness, and type of pose.

When the statistics regarding the Hugo artist nominations were raised these last few months, a  connection formed for me between that Tumblr feed featuring so many naked ladies, and also with this rather awesome cartoon of Batman drawn for the female gaze.  And when I saw Julie's incredible compilation, I could not help but notice a rather outstandingly small percentage of asses raised in the air.  There was certainly the occasional breast, but vastly more complete coverage or restrained cleavage, and far fewer women in invitingly submissive poses.

Now it would be ridiculous for me to say that the sole reason for the disparity in Hugo nominations is the presence or lack of tits in a particular artist's work.  There's clearly a lot more going on here than (het cis-)gender preferences impacting on voting (just as I cannot overlook the from-the-beginning presence of individuals attracted to men in the science fiction community, with their own preferences where art is concerned).

All I can really do is point, ask the question, and hope in future we see more female artists on the Hugo ballot.
- November 27, 2013 No comments:

Contrast is a puzzler/jumping game which - while quite short - is definitely recommended.  Particularly because although challenging in places, I could get through the puzzles without resorting to a walkthrough!  The sign of a good puzzle.

In Contrast you play Dawn, an acrobat who exists in a curious in-between world, visible only to the child Didi, whose life is complicated by family money troubles and a dad trying to make good. 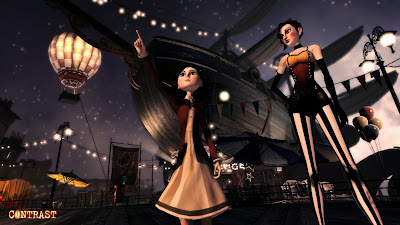 Didi fearlessly sneaks out at night to poke her nose into all the things her parents are trying to keep from her, and happily calls on her not-quite-imaginary friend to get her into places she can't reach herself.  The gameplay involves Dawn's ability to shift in and out of a shadow realm, which turns light, dark and shadow into a mechanic where a staircase can be created by a lantern, and a merry-go-round a spectacular and ever-moving jumping puzzle. 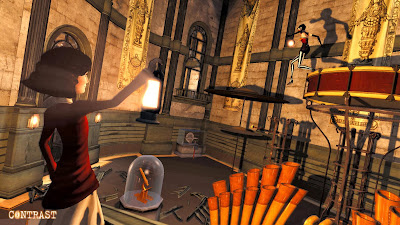 Along with some lovely visuals, the Torch Song soundtrack adds a gorgeous, floaty noir background to what proved to be an excellent game.  [And at a mere $15, well worth the money.]
- November 17, 2013 No comments:

Part  20 of the Travelling Fantasy Round Table, our roaming discussion on aspects of fantasy literature, is in two parts at Valjeanne Jeffer's tumblr. This month we're discussing fantasy and being human.
- November 03, 2013 No comments: