Doctor Who: "The Impossible Astronaut" (Pt 1) and some general Whovian thoughts

"The Impossible Astronaut" has some great parts, most notably Canton, the FBI agent with an attitude, and the special ability of the aliens.  And some great visuals.

Increasingly, though, I'm feeling resistence to the series.  I like (with some reservations) the companions, I like the latest Doctor, but Doctor Who has become an increasingly frenetic experience, with the focus on pace, pace, pace, a hook of mystery, and the ever-building mythos of the near godlike Timelord - such a far cry from the straightforward tales of the scientifically superior man with a time travel machine.

Each season the Doctor has become more special, the stakes have risen higher, the magical element increased.  We're no longer saving mere Britain, or Earth, but the entire Galaxy!  The entire universe!  All of the Universes!  And, uh, all of the universes AGAIN!  And, oh no, the Doctor has died properly this time!  Not.  But he's dead this time!  Maybe.  Timelords are so SUPER SPECIAL that dozens of alien civilisations would invade Earth just to get a few cells of his body.

It's not that Doctor Who has become a bad show.  Or even a different show.  It's been reinventing itself for years, and it's only right that it should constantly grow and change.  But it's become a purple show, some of the melodrama just doesn't work for me, and the season arc feels intrusive rather than ticking over with the current episode's plot.  [I can cope with River Song, but only by mentally editing out certain portions of her.  Rory redeems Amy for me, and I've given up thinking about how much more interesting the story would be if Amelia was the one travelling in the TARDIS.]

All this makes it sound like "The Impossible Astronaut" was a bad episode.  It's not - it was fun, with a big hook of mystery and complexity.  But I hope they take a step back from melodrama.
- April 24, 2011 5 comments:

Alan Wake is an interesting, atmosopheric game about a writer whose holiday turns into a nightmare of monstrous shadows.  I'd heard a lot of good things about it, and going in found it intriguing as Alan has a precognitive vision or two, and he and his wife take a ferry and then drive to the holiday house they've rented on a spit of land almost like an island.

Alan's wife apparently has a crippling fear of the dark, and so when they arrive at the house around sunset, and the lights aren't on, she won't go into the house and waits on the porch for Alan to find the problem and fix it.  Alan (or I, rather) explored the house, the back porch, wandered down the back and finally returned to the porch.  Whereupon Alan's wife, still standing there in the growing gloom, helpfully pointed out a power line leading to a nearby shed for Alan to follow and fix the problem.

Two tips for people who have a crippling fear of the dark:

1. Carry a small powerful torch at all times.
2. Learn how to fix fuses and start generators yourself.

Not long before playing Alan Wake, I was playing a hidden object game which took this issue to new levels.  Two people in a shattered city, man and woman, trying to escape.  Scene after scene the woman would be standing about, while her boyfriend fetched her clothes, fetched the items she wanted, solved the issues related to escaping the city, while the woman literally just stood there.  She wasn't injured, she didn't have the excuse of being paralysed by fear: she just stood there.

In both games the stand-about woman was quickly kidnapped, to my intense relief.  In both cases, my appreciation of the game completely changed because I found them so annoying.

It's small things like these, often highly individual reactions to issues the writers didn't even consider, which can completely change the way a reader/player reacts to a story.
- April 23, 2011 1 comment:

"Portal" was a magnificent game - new, different, just challenging enough, and dominated by the syrupy-sweet psychosis of everyone's favourite AI.  [Not to mention the best closing theme music of all time.]  I was unsure how interesting "Portal 2" could be, given the end of "Portal".  Would anything match GlaDos?  Would it be too different?  Not different enough?

Thankfully, "Portal 2" is well worth playing.  There is inevitably a little bit of "more of the same", given it is based around the same puzzles, but there's just enough new mechanics to make it fresh - and fortunately I've been able to work out solutions for all so far, which helps the satisfaction level considerably.  And the plot, the new characters, the tying together of old and new - all excellent. 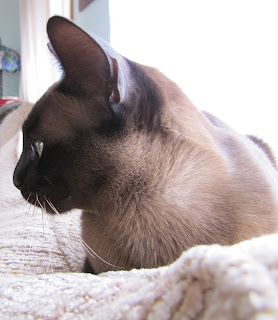 Email ThisBlogThis!Share to TwitterShare to FacebookShare to Pinterest
Labels: writercliche

... introduce me to a frustrated, unhappy, petty person who transcends her faults and limitations to be glorious, then wipe her memory so she doesn't remember how truly wonderful she could be.

... give me a female character who can defeat all comers with one hand tied behind her back - except for her love interest.

... offer me a vivacious woman who cherishes her independence, and then have her get into a 'pickle' and need to be rescued.

... show me a smart active woman doing her utmost to save her world, then make me watch her raped by a monster while the virginal passive and 'pure' woman ends up happily married.

... capture me heart and soul with the story of a girl who was the useless baggage of a team, who vowed to be more to save someone she loved, who stepped up and stepped up, overcame set-back after set-back, until finally...she decided she would never be strong enough and that she would leave it to the guy to fulfil her vow.

... make me regret all that I loved about a story.

This post was brought to you by teeth-grinding plot developments.
- April 11, 2011 6 comments:

Over the years I've written over a dozen novels, but started at least two dozen.  A few of these books will never be finished - they were ideas in chapter form which didn't go anywhere.  Others, such as "Surrogate", "Wings" and "Wellspring" are books I'm still working on, every so often.  "Surrogate" (space nagas!) was two chapters for about six years, until I developed a sudden blazing passion for it one week, and added another five.  I'll go back to it again, the next time the memory worms its way into my head.  "Wings" has been around even longer, and needs me to make a decision on how many viewpoints I want in the book.

"Wellspring" has derailed "Lab Rat One", if only for a re-read and some edits.  Wellspring's world is one which fascinates me: there are four sources of magic in that world, wellsprings with an 'emanation' range of maybe twenty kilometres, and you can't effectively carry unworked magic for a substantial distance outside the emanation range.  Magical devices fade unless they're "juiced".  So around these four wellsprings are massive, luxurious cities, full of manufactories and hospitals and light rail and beast masters and illusionists (and running water and refrigerators).

This is a world where I'm trying to show how much of a difference magic can make to day-to-day life.  My first instinct with mages is not to set them to fighting each other with fireballs, but to preserving food.  Keeping people warm in winter.  Lighting the night.  Wellspring is set in a city where magic and technology creates a kind of golden age, but only for twenty kilometres.  Around that, people who travel daily into the emanation range to bring back magic to "juice" their appliances.  And everywhere else is the people who can't afford to live there.

Beyond the wellspring, we still see great benefit from magic, through goods manufactured with magic but not requiring a continual charge.  But the disparity is great, and the desire to increase magic's reach is where the conflict of the story lies, and that's where my head has chosen to be at the moment.

This is one of the ways I write.  Hopping about keeps the current story fresh, and when I hop back for my next re-read of "Lab Rat One" I'll be fresher for not being in that world for a while.
- April 08, 2011 1 comment:

Today Daylight Savings ended, swapping Sydney back to 'real time' (which in effect means for a while it's light when I leave in the morning, but dark when I get home).  An extra hour to sleep in is definitely a useful sort of time travel.

I also made live a corrected version of Medair, which I had started re-reading because of the Aurealis listing, only to discover four separate typos, some weird characters, and one minor inconsistency.  Most embarrassing.  At least with ebooks and POD, I can correct with relative ease.

"Lab Rat One" (Part 2 of "Touchstone") commences on 1 April, so after my week off to celebrate finishing "Stray", I intended to pick up and roll with the edits this morning in a nice example of good timing.

I wrote one sentence, then went back to reading a rather good murder mystery on my e-reader.  Rather good books are very distracting.

I am very caught up in "Touchstone", though, and even began re-reading bits of "Stray" _again_ over the past few days.  My head is firmly in the events at the end of "Lab Rat One", thinking through the relationship dynamic, and I find I'm glad I stuck with the diary format.  It will probably not work for everyone, but it makes the story very compelling for me to read.