Just as with the first outing, the middle of part of Peter Jackson's extended The Hobbit fanfiction is visually awesome, has great action scenes and is about as tightly focused as a ball of wool after a kitten's been at it.  By adding all the stuff Gandalf is off doing, the story reads far more as Lord of the Rings: The Prequel, and while it's still fun that way, it takes away quite a bit from the story.

The introduction of Tauriel, with an entirely irrelevant plotline about the need for the elves to involve themselves in the fight against the dark, only emphasises this prequel feeling - though on the whole Tauriel's story is one of the most interesting in this particular segment of the trilogy and she's a lot of fun to watch and almost manages to ignore the half-formed suggestion of a love plot wedged in with her "we are part of this war" theme.  I was sorry to see that while Tauriel was introduced so that there could be a female character doing stuff, Bard's two daughters are used for screaming and hiding under tables.

Smaauwwwg himself was all kinds of awesome, as was the humungous piles of gold scenes.

Year's End and Side Projects

Happy end of year break to those who enjoy it!

As a side project (since I have my end-of-year break from work) I've started a tumblr called Hugo Eligible Art(ists).  This is related to the earlier discussion about the scarcity of female artists nominated for the Hugo Awards.  Since I'm nominating and voting in the upcoming Hugos I figured the simplest way to decide who I'm going to nominate is to collect All the Art! :D  Not just limited to female artists, but any artists eligible.  It's a really interesting project for me, because I love SFF art, but usually don't have the faintest idea who is behind the illustrations.

I've been having fun emailing lots of publishers and artists (and the Hugo Committee), but the project is still in its early stages and could always use more publicity if you want to share the link.  It should be an _enormous_ collection of art if it gets off the ground, particularly including nominees on the Best Fan Artist category (I'm still trying to work out precisely what's eligible there).
- December 24, 2013 2 comments: 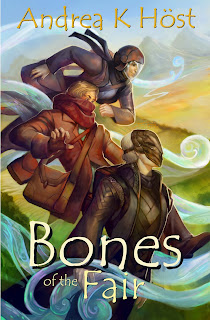 Next up for me is some time working on the various books I've started more recently, along with The Sleeping Life (and maybe Wellspring).  Because I have so many books on the hop at once, there's a good chance that I'll end up not releasing anything at all next year, or at least not until the very end.  It rather depends on how I divide my time.  I expect to have a lot of fun fooling around with all those different worlds, though!
- December 01, 2013 15 comments: