Part 10 of the Travelling Fantasy Round Table, our roaming discussion on aspects of fantasy literature, is up at Sylvia Kelso's blog. This month we're talking about food in fantasy.
- December 31, 2012 No comments:

Jackson chose to include a few visible dwarvish women in the crowds escaping from the Dwarven city, and there is a very powerful scene from Galadriel, but I think I'm going to continue with my theory that Fili and Kili are actually what female dwarves look like, just to balance the overwhelming levels of Y chromosome.
- December 26, 2012 1 comment:

What's a year without a good, therapeutic session of complaining talking about things which have irked, which have bugged, which have FINGERSDOWNTHECHALKBOARD bothered me?  These are the things I could have done without this year:

Things cost more in Australia.  It's not because of shipping.  It's not taxes.  It's not the exchange rate.  It's Because.

For example, Redshirts costs just over $11 in the US Kindle store, and over $17 in the same store, if you're Australian.  Publishers (and other manufacturers, such as game companies) are aware that Australians got stuck paying much more back in the 80s when the Australian dollar was worth 60c US and everything was physical, not electronically transmitted.  Once those factors changed, the prices were artificially jacked up because there was an opportunity for money to be made.

I buy 90% of my books in e-form.  If I hit an artificially inflated price, I usually just lose interest in the book and go buy something else.  [The highest e-book novel price I've encountered was $27.  I've heard tell of much higher.]

From The Hobbit (released a week later than the rest of the world) to Doctor Who, to entire series of television, to e-books with Australian release dates of Never.

The Scalzi example above is an interesting one, because he gets quite shirty with people who complain about the prices and availability of his books when he posts about them on his blog. His stance being that he needs to maximise his income and selling by region is one of the ways to do it, so don't complain to him.

Yeah, perfectly justifiable attitude, but, well, I guess I'm no loss to him as a reader.

KDP Select, which Amazon brought in at the end of last year, offers self-publishers advantages (most importantly better treatment by its algorithms) in exchange for exclusivity.  It instantly divided the self-publishing community, and continues to be a large point of contention.

I hate exclusivity so, even though I don't sell particularly well on the other retailers, I won't go near Select.  But it annoys the heck out of me because (either coincidentally or as a result), my sales momentum dropped considerably when it came in.  I've never again sold in the numbers I managed just prior to Select.

The thing which annoyed me most about all the reviewer bullying dramas this past year is the complete incomprehension of the word "bullying".  Bullying is not having a different opinion from a crowd or an individual.  Bullying is not saying you didn't like something.  Even if you express that opinion harshly, or with funny pictures.

Extra-infuriating was the fact that most of the really over-the-top "bullying" accusations of the year revolved around politely-worded, even-handed reviews which happened to discuss the poor depiction of women.

There's other things which annoyed me over the year (the Australian media's campaign against Julia Gillard for a start), but these are the big ones, so that's it for my Christmas Eve grinch.

Email ThisBlogThis!Share to TwitterShare to FacebookShare to Pinterest
Labels: rant

The Next Big Thing

Sylvia Kelso tagged me for this meme, and though I'm not usually much of a meme-participant, I thought this one was quite interesting.  [Sylvia, incidentally, is one of the few fantasy and science fiction writers who sets most of her stories in an Australian landscape (though not necessarily Australia).  If you have a taste for compact, poetic prose and characters tortured by impossible circumstances, check her out!]

What is the working title of your next book?


Will your book be self-published or represented by an agency?


Where did the idea come from for the book?

I was reading Georgette Heyer's "Regency Buck" and finding it tremendously frustrating.  That story features a girl who thinks she can take care of herself, but so obviously can't, and continually needs rescuing (by a very smug love interest).  So I decided I wanted a story where the girl runs about rescuing all the people all the time.  [She's not quite that bad, but she does a good piece of rescuing, and rarely requires it.]  I was also in the mood for a fantasy murder mystery, and wanted a herbalist to be a character.


What genre does your book fall under?


How long does it take to write the first draft of your manuscript?

This varies wildly.  The shortest would have been around three months.  The longest over a year.  "The Touchstone Trilogy" was exactly a year, since I wrote it in "real time" as diary entries.

Well, it's a girl-disguised-as-a-boy book, so any of those.


Which actors would you choose to play your characters in a movie rendition?

No-one springs to mind for Ash (amusingly, if I Google image search for 'androgynous teen actress' the most common result is Justin Bieber, but she doesn't look like him).  I guess Natalie Portman when she was in "V for Vendetta"?  But not so pretty, and much shorter.  [Edit: except apparently Natalie Portman is very short, which I didn't know.]

The next major character, Thornaster, also doesn't have anyone close enough, but if you took Odad Fehr (back in his Ardeth Bay days) added a dash of the Old Spice Guy and a sprinkle of Daniel Day-Lewis, you might get something close?
Who or What inspired you to write this book?


What else about your book might pique the reader’s interest?

More neologisms than you can poke a stick at!  Make your head spin trying to remember new words!


What is the one-sentence synopsis of your book?

[Oh, okay.  Ash probably doesn't qualify as a Mary Sue.  She has no special powers for a start.  Just a can-do attitude and a penchant for climbing things.]

Time to tag someone else:  A. C. Fellows met in North Queensland and lived there a long time. For the past eight years they have lived a long way from anyone on the New England Tableland in New South Wales. They have two children, a role-playing system, and any number of worlds, the most well-developed one of which is Tsai. While most of their works are not strictly co-written, they grow out of a tangled mass of stories, characters, and backgrounds that they have generated together.  They'll have a post up about their Next Big Thing forthwith.
- December 21, 2012 3 comments:

Rise of the Guardians

Saw this with my three year-old nephew and eighteen year-old niece.  Nephew promptly fell asleep, niece liked it.  I liked it too, so all's good.

- I only had a couple of minor issues with it.  As usual, very Western-centric (seriously, the Easter Bunny and the Tooth Fairy are not universal myths that every child in the world believes in).

- The voice actor for Jack Frost was way too old.  Jack looks about 12.  14 at the most.  A voice actor who sounds mid-twenties was leading to some severe aural dissonance.

Hanging out the clothes this afternoon, I could hear this...gnawing.

Coincidentally, I'd just been playing the opening of the old computer game, The Bard's Tale, which begins with the classic "kill the rats in the inn cellar" quest.  [Not to mention some of the most gratuitous breast shots I've seen since, well, the first time I played The Bard's Tale.]

Eventually, after much confused peering about, I found the source of the noise in the tall evergreen just over the fence. 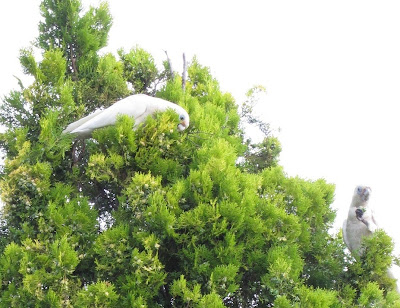 The birds are Corellas (I think), and they're busy eating the conifer seeds. A step up from rats!  [Though, hopefully, no giant, fire-breathing corellas show up, since that's where The Bard's Tale quest ended up.]
- December 16, 2012 No comments:

Just giving advance warning that after Christmas I'll be lifting my prices from $3.99 to $4.99 per book. I don't think I'm ever likely to price my books in the "upper regions" (ie. $6-$10), but there's this interesting 'perception of quality' issue with books below a certain price. Since my sales have been generally sluggish since KDP Select came in (with its preferential promotion of exclusive books), I have some freedom to experiment with the price I originally intended, but kept hesitating on going to.

I've been a complete slacker with the editing of "Hunting" (I'm only about a third of the way through) and will have to light a fire under my tail. I'm actually a little nervous about the book's reception, since it's the 'earliest' of the books which I'm putting out (I wrote it before "Medair", though after about five other books which will never see the light of day) and it does read to me as "young". More straightforward plot, less deconstruction of the fantasy genre. Still, I love Ash, who has no special powers but an entertaining amount of self-belief.

I really don't want to delay the current publication date just because I've been playing too many MMO's, though, so will try to settle down to work.
- December 15, 2012 2 comments:

Each year The Book Smugglers host an increasingly epic end-of-year event known as Smugglivus. This year, I was lucky enough to be invited to participate! The topic could be "anything and everything book-related" and though strictly speaking "of the year" may or may not have been in the outline, I plumped to do a retrospective of my favourite author. You can head across to read my Rough Guide to Diana Wynne Jones at The Book Smugglers.
- December 05, 2012 3 comments: