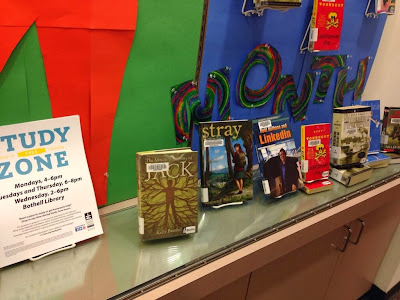 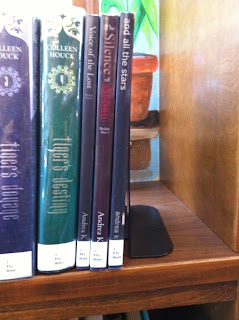 At the beginning of the year I noted that I'd hit 10,000 sales by the end of 2012.  Prompted by Patty Jansen's informative post, I've updated my figures for those interested in self-pub stats.

I've been totting up last year's figures for my taxes (which run from 1 July to 30 June in Australia) and my (gross) royalty income looks to be around $16,600.  This is less than last financial year, despite what the sales numbers suggest - but mainly because Amazon pays by cheque about two months after you earn the money.

As you can see, The Touchstone Trilogy is still by far my most popular books.  Partly that's the power of series and first book freebies, but it's also simply very popular and gets very good word of mouth.  Stained Glass Monsters remains my least successful (ironic, given it's one of my favourites).

It wasn't until I'd totted these figures up that I could see that both And All the Stars and Hunting had performed quite well for stand alones.  Their numbers will no doubt drop off now we're well past their release dates, but I'd expect to continue to sell several hundred each year.

It would be nice to believe that sales will continue to improve at this rate, eventually giving me a comfortable income on which to write full time, but as Patty pointed out recently, self-publishing is a very unpredictable industry.  I was completely unaffected by the Kobo debacle - but as you can see it's not a primary market of mine.  [It will be interesting to see if that changes after a Kobo-related promotion I'm theoretically participating in at the end of the year.]

Like most self-publishers, Amazon is by far my best outlet.  Both Barnes & Noble and Apple improved this past year as a direct result of Bookbub, which is a cheap books notification service which has been one of the few effective promotion tools lately.

The big money in self-publishing tends to be in certain genres, and also in writing series.  Unfortunately I don't think I have the writing skills/style to do well in the big money genres (thrillers, romance and erotica can be difficult to write!), but I am at least writing series books this year.  Typically, I'm writing the beginnings of three series at once (while finishing off Bones) and the things I'm interested in writing tend to not match up with the types of books which become immensely popular.

So, currently I'm working on four series at once.  I often jump back and forth between books, and this suits my mood at the moment.  I'm on track to get Bones of the Fair out in November (I work on it on the train in the morning when I'm at my writing best).

One of the books is the first in a series I've been itching to start for a while - a "virtual reality game" plot involving AI's, personal spaceships, duelling, and all sorts of over the top and unlikely things (along with addressing some of the questions of gender and identity which arise playing avatars online).  The game (which is called Dream Speed) is set in a post-singularity universe, and while I know the name of the first volume (Snug Ship), I've been tossing around what to call the series.

So, given that you know nothing about this book except that it's about someone playing a virtual reality game involving spaceships in the far future, which of these series titles would catch your attention?
There's a poll in the right hand column of the blog, so feel free to select one, or comment on this post.  [I'm sure I'll think of more names in the year or so it takes me to write a book, but starting impressions can't hurt.

Part 19 of the Travelling Fantasy Round Table, our roaming discussion on aspects of fantasy literature, is up at Warren Rochelle's blog. This month we're discussing evil and the fantastic.
at October 01, 2013 1 comment: