The Travelling Fantasy Round Table : Part 7 : Animals in Fantasy (Pt 1)

Part 7 of the Travelling Fantasy Round Table, our roaming discussion on aspects of fantasy literature, is up at Deborah J Ross' blog. This month is the first of a two-parter looking at animals in fantasy.
- September 27, 2012 No comments:

Email ThisBlogThis!Share to TwitterShare to FacebookShare to Pinterest
Labels: roundtable

And All the Stars ebook competition

Closed!  Congrats Jen, Jennifer and George - the ebook has gone out to you today.

Just over two weeks out from release day (3 Oct) - sounds like a good time to run a competition for my blog readers.  A nice simple one this time - just email giveaway@andreakhost.com with "And All the Stars competition" in the subject line, and I'll randomly pick a winner or two just before release.

Make sure you include your preferred e-format in the body of the email!

I have a guest post up today over at the Readventurer blog, all about Agatha Christie.  There'll be a Part 2 up tomorrow which covers other favourite mystery writers.
- September 12, 2012 No comments:

First draft of And All the Stars done!  It came in at just over 90,000 words, and involved quite a bit of tearing up during the last chapters.

The word cloud shows the focus on my galmance (my term for the girl version of a bromance), but is not particularly spoilery. 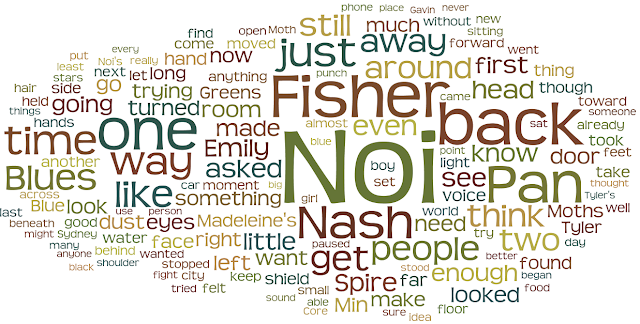 Next step is the end-to-end re-read - during final chapters I usually come to a better understanding of some characters, so on the re-read I'll do a little shading and emphasising certain aspects - as well as spotting typos, pace issues, continuity errors, etc.  Hopefully I'll get that done by the end of the week (though fatigued at the moment because I pushed to get the draft done).

After that, betas - I'm fascinated to know what their first reactions will be.  Then editing passes, copy-editing passes.

Just over eight months for first draft, which isn't bad.
- September 04, 2012 No comments: