To those unfamiliar, Final Fantasy is a series of games linked generally by concepts, monster types and combat systems, but with each iteration featuring different characters and often very different worlds.  They tend to be very long games (100+ hours of gameplay) and involve a lot of running around vast maps, working through various beautifully animated cut scenes between randomly encountering monsters and levelling up enough to face the final, epic, multi-stage battle with a god or near-god.

The stories (primarily focused on spiky haired brash young guys carrying oversized swords) are usually both convoluted and quite emotional.  Happily for me, the rapidly-increasing collection of characters you can include in your combat party generally includes at least one female character who interests me.

The most recent games have tended to include sequels continuing the stories of some of the characters or of the world, and so it is with Lightning Returns, the third in the even more convoluted than usual story of Final Fantasy XIII.  It's one of the rarer games that focuses on a female main character - and indeed the core of this trilogy is two sisters - Lightning (stoic and guardly) and Serah (syrup sweet).  Although they start out slightly at odds because Lightning is not much impressed by Serah's new fiance Snow, there is never any real drama between the two in the whole trilogy - instead they act as each other's plot motivation.  Lightning is trying to rescue Serah, or Serah is trying to find Lightning.


In Part 1, Serah is almost immediately turned into crystal and Lightning and Snow reluctantly work together to save her (and, not incidentally, Cocoon, the floating habitat they live on).  They end up succeeding in one of these things, but not the other.  Additional party members are Hope (bratty, resentful and newly orphaned), Sazh (single dad to Dajh), and Vanille (more syrup) and Fang (awesome) who are never outright stated to be but are widely presumed to be lovers.  The story ends with Serah recovered, Fang and Vanille now crystal, and the floating habitat crashed, but loss of life minimised.

Part 1 had issues with the "on rails" gameplay (most FF games give you a lot more freedom of choice), and I'd say the plot was okay without having as much impact as the average FF game.

Part 2 makes Serah our main character.  After the fall of Cocoon, Lightning vanished from everyone's memory but Serah's (who has developed an ability to see/travel through time), and she teams up with Snow, Hope and a newcomer called Noel to go time travelling in search of the sister only she remembers.

I found the gameplay of this story (which encourages you to replay segments of the game you've already played to see what your time-travelling interference has caused to change) so off-putting I gave up on the game about a third of the way through.  From what I gather, the ultimate plot revolves around a constantly reincarnated seeress named Yeul, who has powers similar to Serah's, but dies from time shock every time the timeline changes (Noel is in love with one of her incarnations).  This has driven her immortal guardian Caius mad, and he is going to unleash the Chaos to stop time to stop Yeul from suffering.  Lightning has been off fighting him.  The story ends with Lightning in crystal, Fang and Vanille rescued from crystal, Caius defeated (but his death causing the release of the Chaos).  And then Serah drops dead (from the same time shock cause that was killing Yeul).

I'm kind of glad I gave up on that story early on.


Anyways, that was a long introduction to the game I just played, Lightning Returns.  The release of Chaos has stopped people (including children) from aging, and five hundred years later one of the remaining gods, Bhunivelze (I shall call him Bunny), has decided that the best way to fix this is to completely destroy the world and start over.  Lightning has been sent as the Saviour, tasked by Bunny to rescue souls and preserve them for the new world.

People are oddly calm about this whole world ending shtick, but I guess if you'd lived for five hundred years, the ennui factor would be high.  Bunny has promised to bring Serah back to life (presumably in the new world) as a reward, and so Lightning runs about either killing things/people who attack her, or trying to bring them to some kind of emotional fulfilment so that their souls are fit to be salvaged.  [Bunny only wants balanced souls, y'see.]

Unlike most FF games, Lightning does not gain a whole bunch of party members to help her in fights.  Instead she keeps encountering allies from the first two games, most of whom try to kill her for various reasons.  Most of the time she's running about solo until eventually she figures out the bits that Bunny hasn't told her, and saves the souls that Bunny wasn't going to be bothered to save.  All the major characters from the first and second parts are reunited, and reborn, white light, the end.

It's an okay story, again not nearly as compelling as other FF outings.  While I like stoic characters such as Lightning, she really didn't have a strong emotional arc to go with the story. The most she changes is from not liking Snow at all, to deciding that maybe he and Serah will work out after all.  Indeed, Lightning's stoicism is presented in-game as being a problem, and in theory she's reunited with her 'inner child' at the end of the trilogy (but I think behaves much the same).

The gameplay of Lightning Returns doesn't have the irritating "do over" structure of Part 2, and is considerably less "on rails" than Part 1 and I would call it the most enjoyable to play except for the stupid and bizarre decision to add a time limit to the game.  Instead of freely running around doing side quests and exploring, you have a pointless count down ticking away, making you constantly feel rushed, and having to choose whether or not it's worthwhile doing certain things.  One of the stupidest design decisions I've seen for ages, and I really wish they hadn't included it.

The Dress Up Doll

But that's not the main thing that bugged me about this game and brought it down as a whole!  As I mentioned, Lightning doesn't have an ongoing party of friends to fight with her in this game, so to make up for it the designers included lots of different outfits and accessories to keep the players entertained.  Amusingly, one web site I was reading talked about how they decided on the outfits and what they thought Lightning would wear - there was evidently some consideration of the outfits matching her stoic, guardly and rather humourless personality. 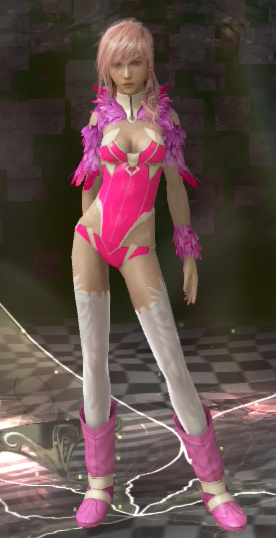 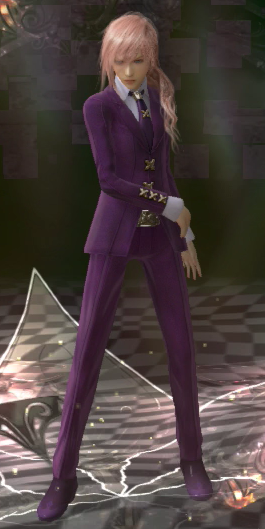 The left is a Miqo'te costume from FFXIV.  It came with an end-combat bent over, ass in the air pose.  Super in character for the stoic, humourless guardswoman heroine.  The right is...well.  Something.

Still, at least there were options that weren't all bare flesh and cleavage.  I quite liked the middle outfit (the costume is called 'Velvet Bouncer') and had Lightning running around in a black and white version of it much of the time.

You could also get a whole host of extremely silly accessories to wear, from sunglasses to an umbrella sprouting from the top of her head.  That really livened up a few cut scenes.

So, Lightning Returns is (as usual) one of those games where you have a lot of good stuff (stoic female lead kicking everyone's ass!) and pretty cut scenes, and pretty engrossing combat. 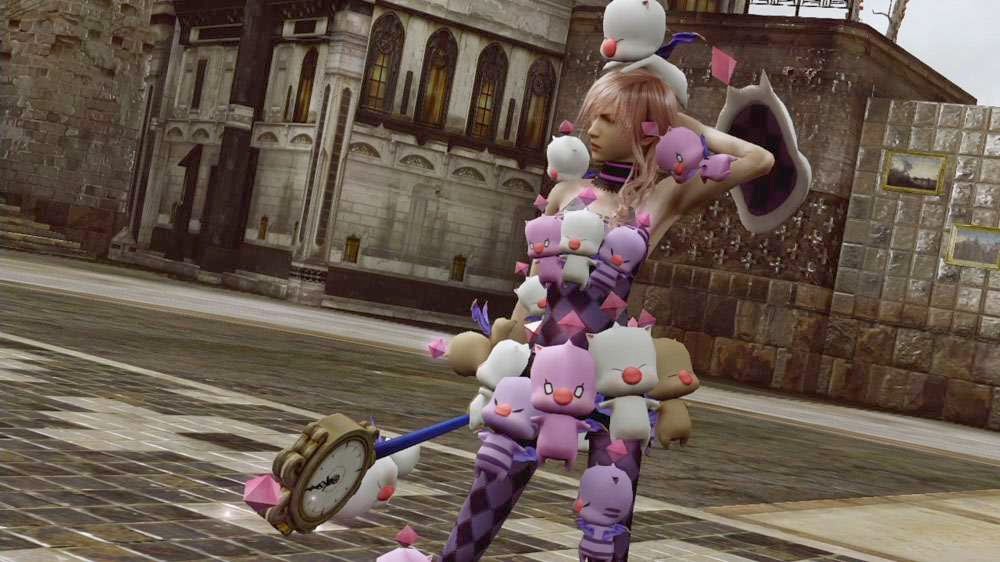