The Internet is not a private conversation

As a user of Goodreads, I've been following the recent spate of "Goodreads is a cess pit of negative reviews" comments from authors with bemused surprise. Not because it's unusual for authors to not enjoy negative reviews, but that in 2012 so many people don't seem to realise that the Internet is a public space. Anyone who has any sort of public image and uses the internet should surely know by now that:

- An email can be forwarded to anyone.
- Not only your fans can read your Twitter feed.
- Google alerts work for more than just authors.
- Google cache means you didn't delete it as much as you thought you did.
- Screenshots are forever.

I gripe about negative reviews all the time. To myself. The mute ratings, with no explanation of why, bring an instant plunge of spirit, but the sting doesn't linger. The easiest to dismiss are the "just couldn't get into it" reviews, or "this is trash", with no further explanation. These reviews often boil down to "I like chocolate, you like vanilla". The difficult reviews to swallow are the detailed, reasoned reviews, written with care, often pointing out aspects of the story that the author didn't realise someone might find problematic.

I dislike most a four-star review of one of my books - because it suggests I wrote about something incorrectly which I happen to think I have right. The tone of that review is very condescending, and I've bit my lip over it more than a few times, but I don't see any value in arguing with the reviewer (let alone organising campaigns against her). And - as those reasoned reviews so often do - I was spurred to spend the time to question myself over my treatment of that item in the books.

But any name-calling I might want to do happens entirely in my head. Because an author having a public brawl about a review they dislike will only draw more attention to that review. Because it's impolite. Because people are allowed to have different tastes to me, or to see issues that I didn't consider, and to state their views. They're allowed to add snark. They're even allowed to be 'wrong'.

Being a professional author is a very public thing (even for us obscure self-publishing types), and I can Google the substance of internet flame wars which happened more than ten years ago. Comments on Twitter or blogs attacking reviews or review sites make me think of nothing more than someone standing at a counter of a bookstore, ignoring the customers in store while talking loudly on the phone about the horrible customer over by the mystery shelf.

Except with an audience of everyone in the world. 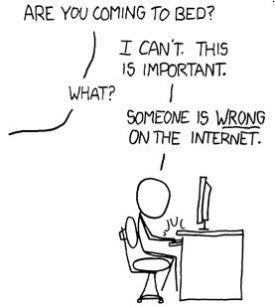