This (Australian financial) year, a couple of Bookbub promos have seen a spike in my royalties that I suspect won't be repeated next year, so I have been busily upping my expenses (and thus lowering my taxes) by commissioning covers well in advance.

No-one is going to be surprised to discover that the Cwn Annwn are a factor in Tangleways after this cover. :D  I asked Julie to use salukis as the model - and this hound of death is just as gorgeous and strange as I hoped.  [DWJ's Dogsbody was one of the major inspirations for the Trifold world.] 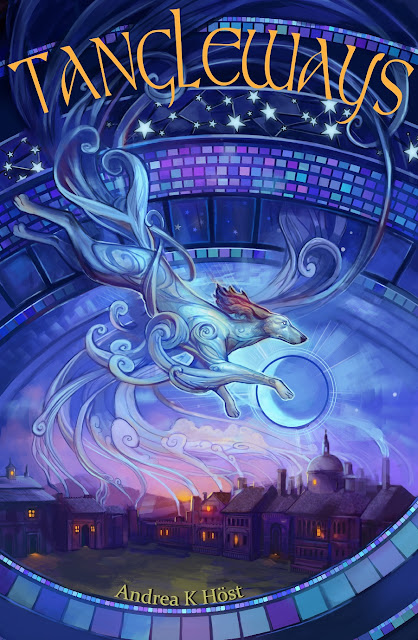 The font layout was HARD for this one, because the background curves aren't symmetrical, but I think this works.  [I've taken to designing an ebook cover with larger fonts, and then a TPB later - where the edges will be cropped.]

WIP-wise, I've been bouncing around.  I've written one of three planned short stories for the trip to France that sits between Pyramids and Tangleways.  Actually, at around 7,500 words, it might just creep into novelette status - a first for me, and the next will probably be a little longer, though the third is just a shortish scene that could helpfully be titled "Ned's First Kiss".

Primarily, though, I've been working on The Sleeping Life and still expect it to be my next release, out toward the end of the year.

I've also been straying a little into my MMO game series, and have commissioned two covers for it (as part of my "OMG, I don't want to pay that much tax I'd rather buy covers" splurge).  After TSL has been released, I'll be working concurrently on both the Trifold and Singularity Game series, working my way through them.  Singularity is an open-ended series - no fixed end point.  I'm finding its worldbuilding endlessly entertaining, especially since people have been talking lately about utopias and the game in Snugships would probably qualify for one - though humanity is kinda on the level of chocobos in that universe.  [For those who don't get the Final Fantasy reference, that means we make great pets. ;) ]
- May 28, 2015