It's got magic in it...the Clarke Awards and 'technical fantasy' 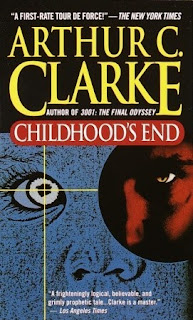 I usually don't have much to say about awards shortlists beyond: yep, that's a list of books this particular subset of readers thought were in some manner 'best'.  But reading this post by Tom Pollock did cause a few synapses to fire.  Pollock references Liz Williams' article regarding the reasons this year's Arthur C Clarke Award is an all-male shortlist, and highlights one paragraph in particular:


This leads us into the wider conversation as to why, despite having a significantly enlarged entry this year (a 36 per cent increase on the 60 books submitted in 2012) we received disproportionately fewer from women, of which many were technically fantasy.

Now the criteria for the Clarke Awards aren't the most detailed I've seen, and the relevant section reads:


The Arthur C. Clarke Award is given for the best science fiction novel first published in the United Kingdom during the previous year 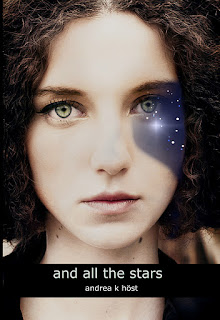 And Tom Pollock saliently points out: "so what if they’re fantasy, why should that stop them from being SF as well?"

It's no surprise that the Clarke Awards would lean toward this definition to mean "hard science fiction", or "focused on extrapolation of a scientific principle or concept", or at least "in the spirit of Arthur C Clarke" books, but where do we draw the line in fantasy elements?

One of Clarke's best-known novels is Childhood's End, where aliens which resemble bat-winged demons basically take over Earth and uplift humanity, then watch with interest as the new humans evolve into a telepathic hive-mind.  The story culminates with Earth dissolving into light.

Now, I call my Touchstone Trilogy "science fantasy", primarily because it features worldgates and "psychic space ninjas".  And it's full of my extrapolations of nanotech and a 'connected' society.  I think of And All the Stars as science fantasy too, though I don't think there are any more fantasy elements in it than in Childhood's End.  But I don't think it's focused enough on a scientific principle or concept, being more caught up in questions of friendship.

Champion of the Rose, however, is. 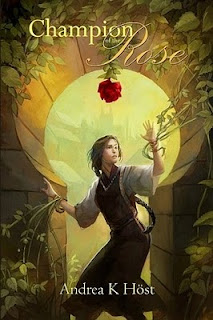 I've only seen one review which mentions that Champion of the Rose reads as science fiction.  I mean, it has tons of magic, and Actual Gods, and a possessive rose bush, but it's fundamentally a Genetic Manipulation Gone Horribly Wrong story.  The race called the Fair in Champ uses magic to create genetically modified plants and animals - alterations they term "beyond the blood".  It's strongly indicated that their race probably became "the Fair" by modifying themselves, and they now have extremely strong laws forbidding genetic modification of any of their people - and the plot is driven by what is suggested is a genetically modified member of the Fair.

It's in the worldbuilding that I do most of my extrapolation.  There's little world hunger, because the Fair chose to gift the other races with several useful crops that keep most kingdoms above subsistence level.  Food preservation is greatly enhanced by genetically modified cloves.  There's easily available birth control.  It's a book about how 'easy' genetic manipulation impacts on a pre-industrial world.

Now, I don't think I ever went far enough with my extrapolation to make Champ an award-worthy novel (and I seriously doubt I qualify for the Clarke Awards, though I've no idea how self-published books which are merely 'available' in Britain count in these matters, and it would be several years too late anyway).  But I'm a little saddened by the implication that many books among this year's possibilities (whether written by men or women) were automatically discounted by the judges as "technically fantasy".

How much magic does it take to stop something from being science fiction?
- April 06, 2013